As part of the flavored Markdown used in tagtog, you can create blocks with custom styles/layout. As we all know, annotating data can be a tedious task, and a more attractive content can be key to keep your team engaged.

How to use tagtog blocks?

You can add blocks to your content in two ways:

Import to your project a .md (Markdown) file with one or more tagtog blocks. You can use the API or the GUI.

Copy or write the blocks directly in the +Content menu and set the format as Markdown in the advanced options.

tagtog blocks are Markdown code blocks. For example, you can add a textbox code block as follows:

This block draws a circled box around the content.

If you combine this layout with the tagtog annotation capabilities, you could perform chatbot annotation tasks such as:

Block for the human interaction. 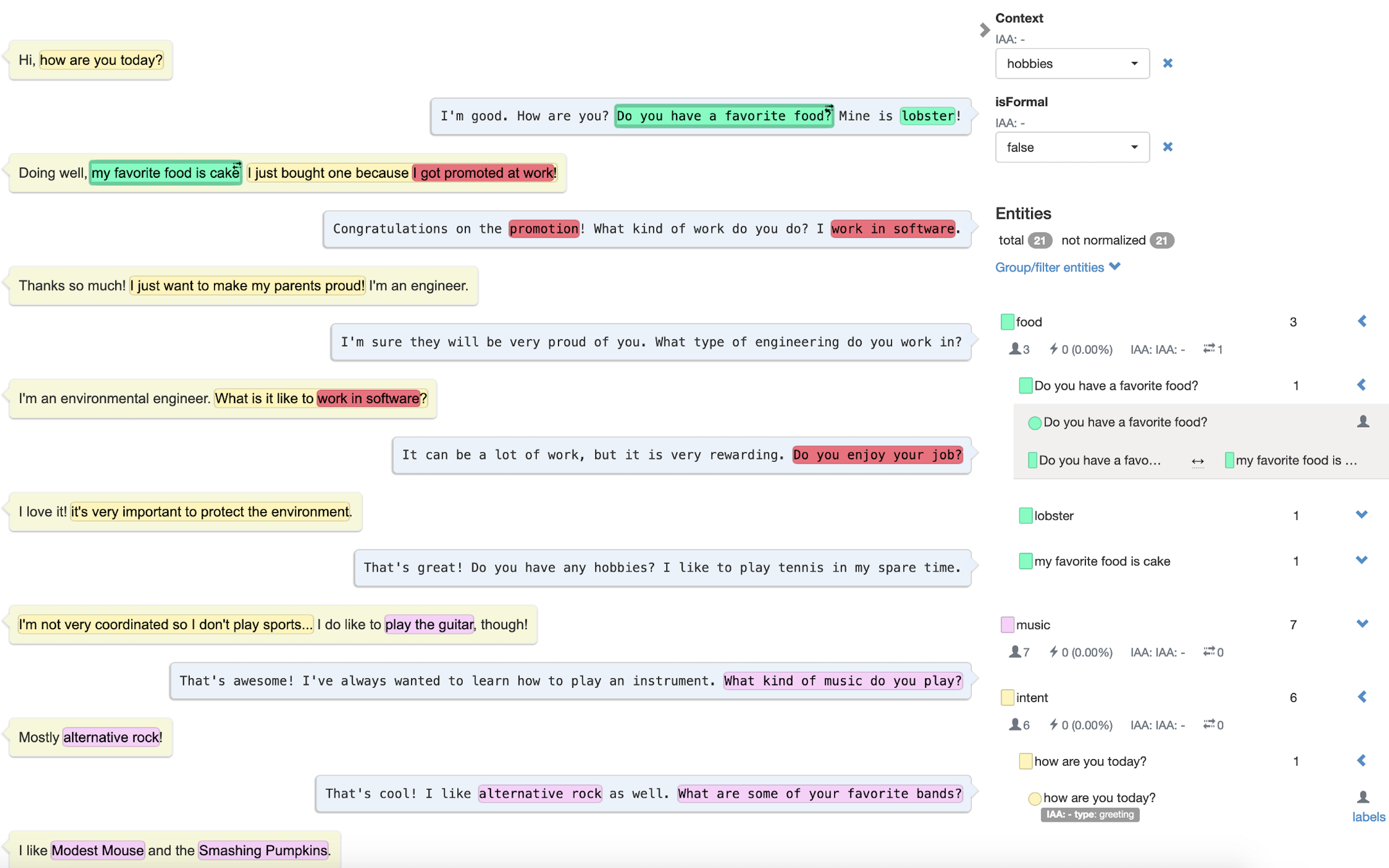 Example of a conversation between a human and Facebook BlenderBot chatbot

You can combine bot and human blocks equally. 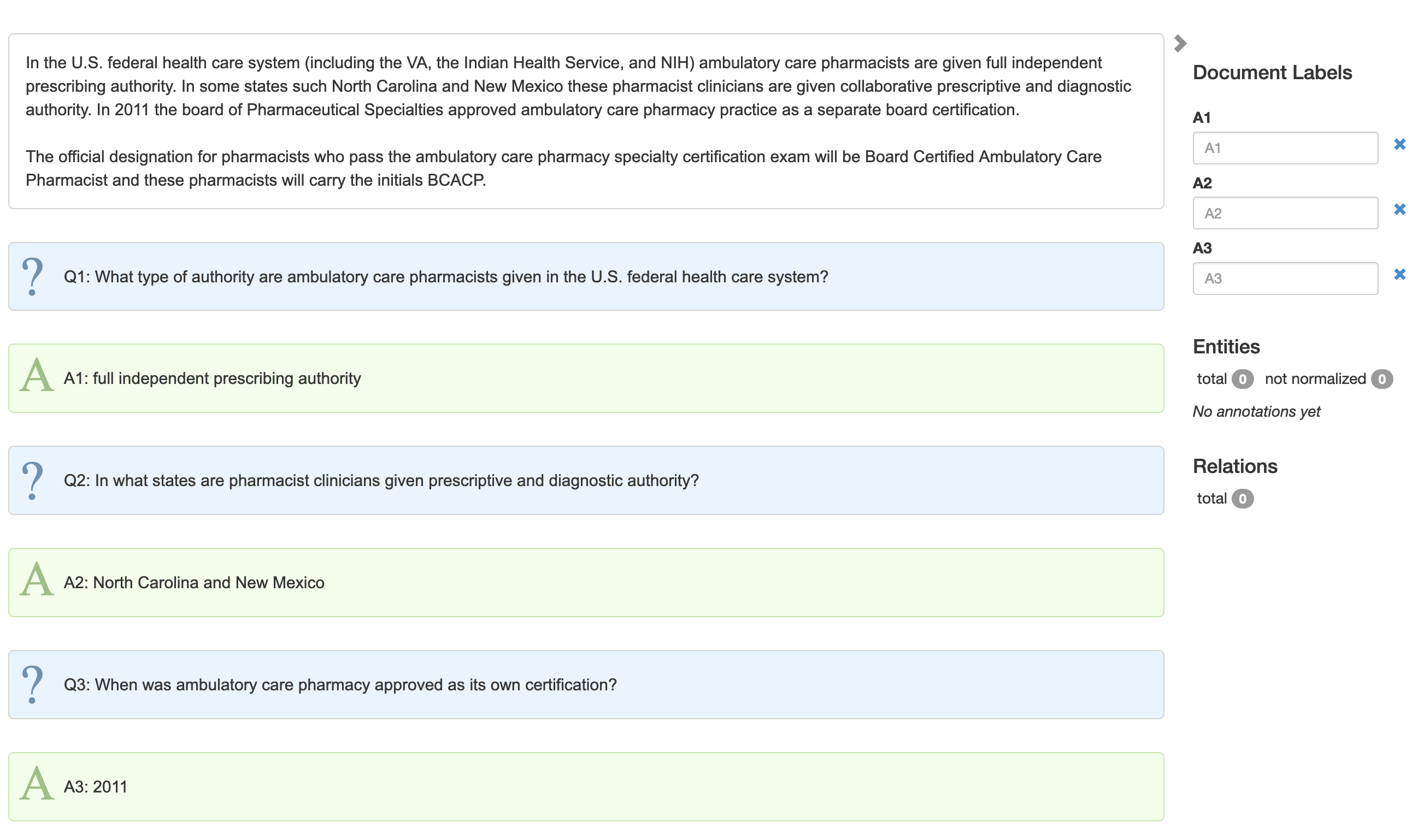 SQuAD like dataset sample. On the document, we see at the top the paragraphs supporting the questions. Below, question/answer pairs (Q1-A1, Q2-A2, Q3-A3).

You can combine blocks of different types, for example textbox and question. You also can repeat blocks in the same document, for example, multiple question and answer blocks together.

Useful to annotate tweets (please notice that we are not using iFrames to load original tweets from Twitter).

Example about how to annotate and to classify Tweets with tagtog. A more engaging layout than raw plain text.

Specially at the beginning of an annotation project, it is important to guide the annotator through the whole annotation flow. Usually, a set of guidelines are put together, annotators read through them and they try to label some documents following these rules. Why not to combine theory and practice?

Block to define a task for the annotators. 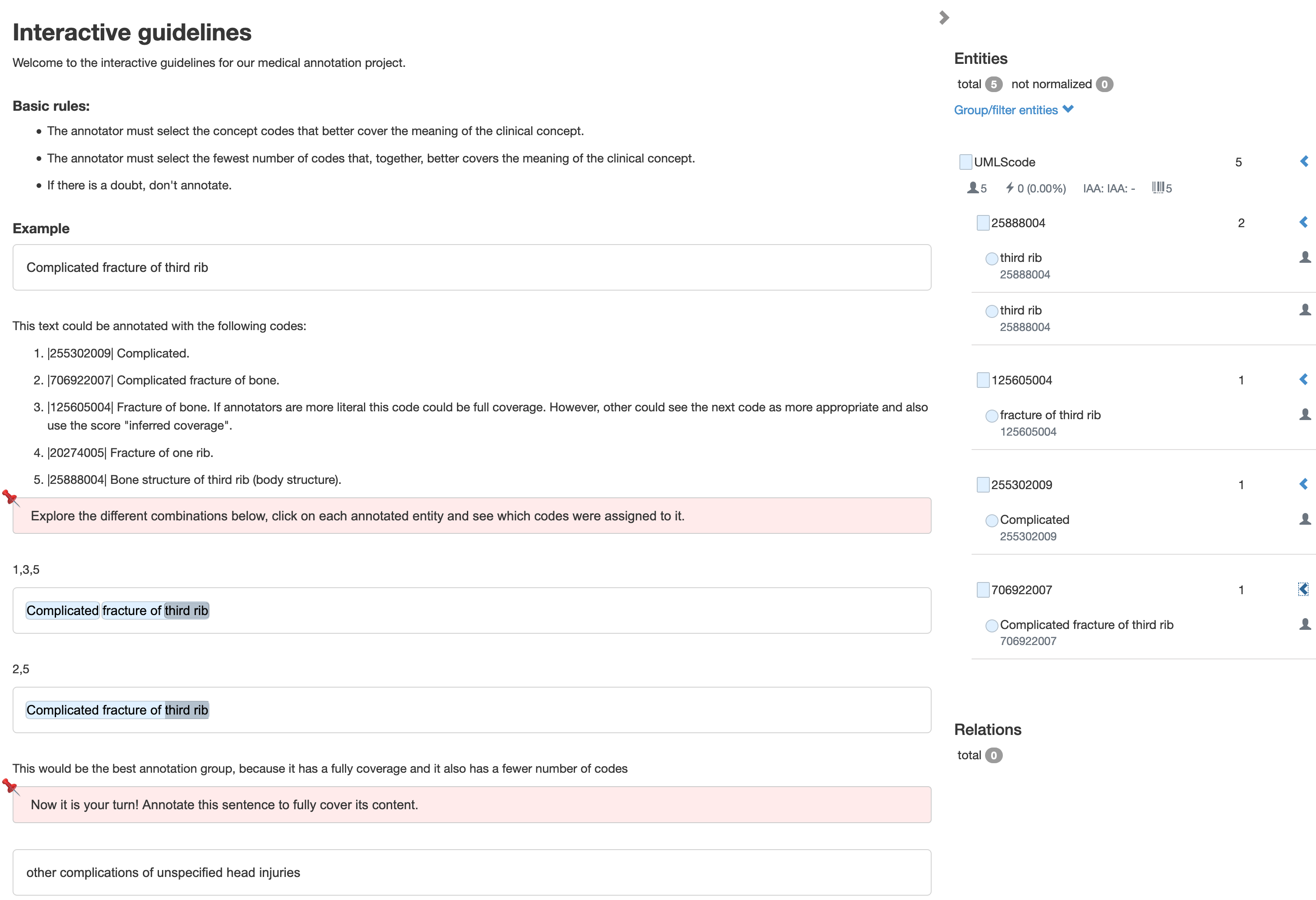 A sample annotation guidelines with an example and a task for the annotators to validate their learning. Afterward, their annotations can be reviewed by a third person to track annotator's progress. Please notice in this example that you can combine Markdown and tagtog blocks.

Sometimes you need to add meta information to other blocks or parts of your document. This contextual information might be important for the annotation task. For example: timestamps, specific ids, etc. or any other piece of information associated to the block.

Meta blocks are not explicitly linked to other blocks, they are stand alone blocks. Therefore, meta blocks won’t auto align with the blocks they refer to.

This block is not annotatable, and users cannot create any manual annotations.

We add the timestamp to each interaction human/bot. This information can be useful for the annotator to better understand the context. In this case, as human/bot interactions are aligned to left/right respectfully, we also added the left and right add-ons to align the meta information.

Confucius quote. Notice the content of any block uses the verbatim format. Therefore, all spaces, line breaks, etc. are respected. 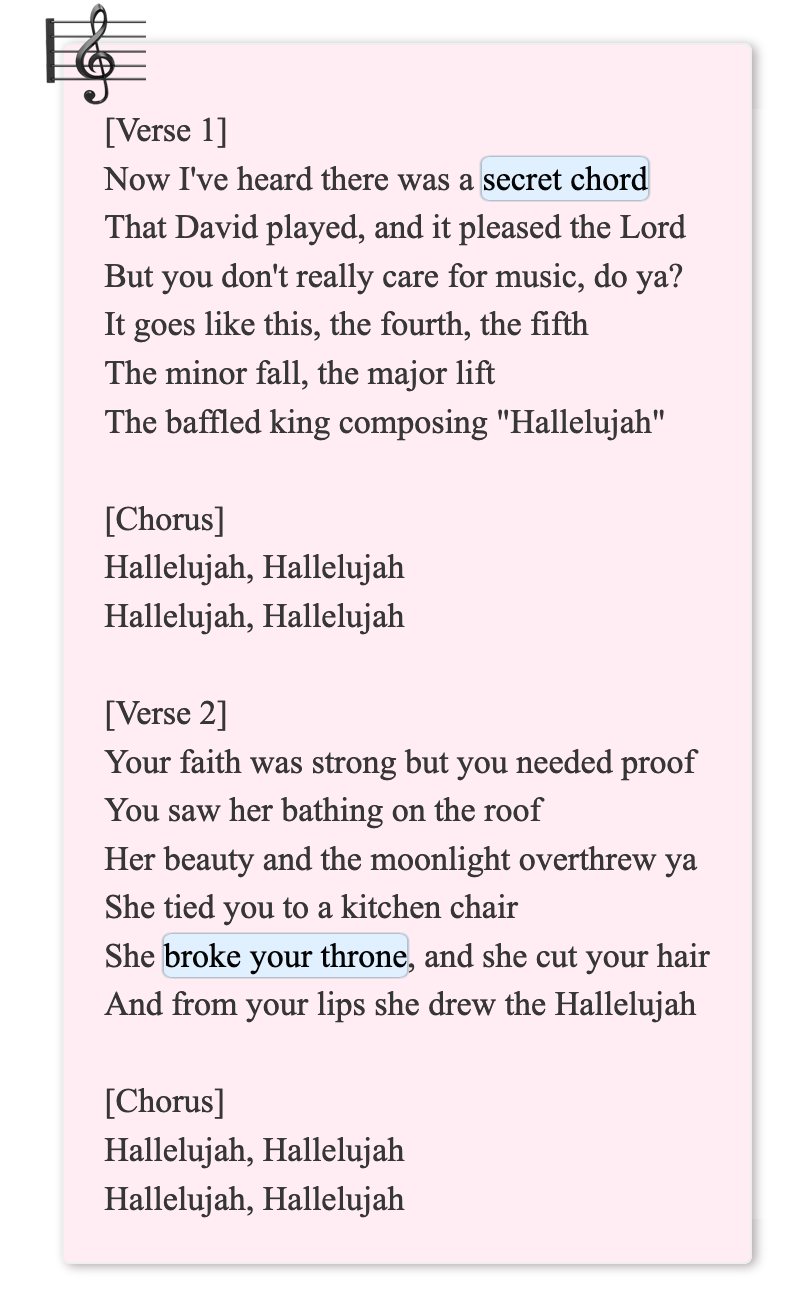 Block to define a poem. 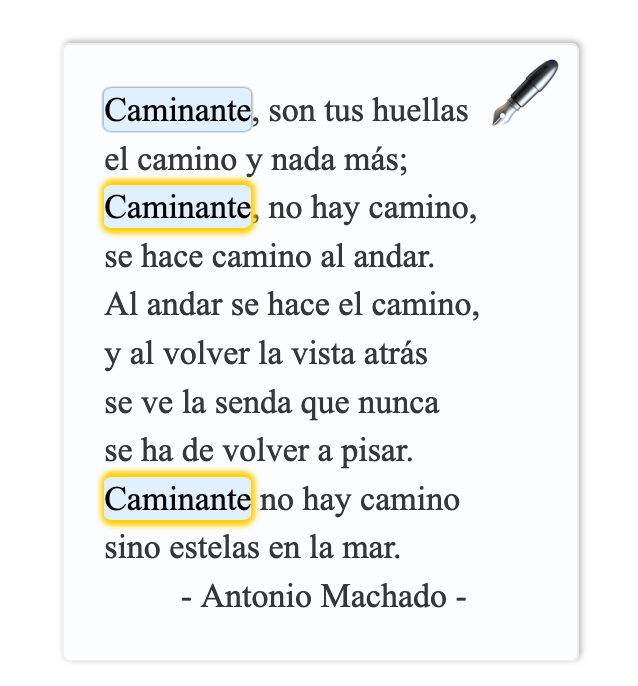 A poem from Antonio Machado

This add-on marks a block with a warning to indicate the annotator to pay special attention. For example, to illustrate that this block contains critical information or it is a source of annotation conflicts.

A warning icon appears on the top right of the block to indicate that the annotator should focus on this item.

Tip: one block can have more than one add-on. For example: task no-annotatable attention

This add-on marks a block as not annotatable. This is useful if you don't want annotators to annotate specific parts of your document (e.g. tasks or information for annotators). Manual annotation is not possible for blocks with this add-on.

In this example, the user cannot annotate the content in the task block

This collection of add-ons are useful to align your blocks. For example, to align a block to the left/right or to create a multi-columns layout.

Use this add-on to align a block to the left/right. 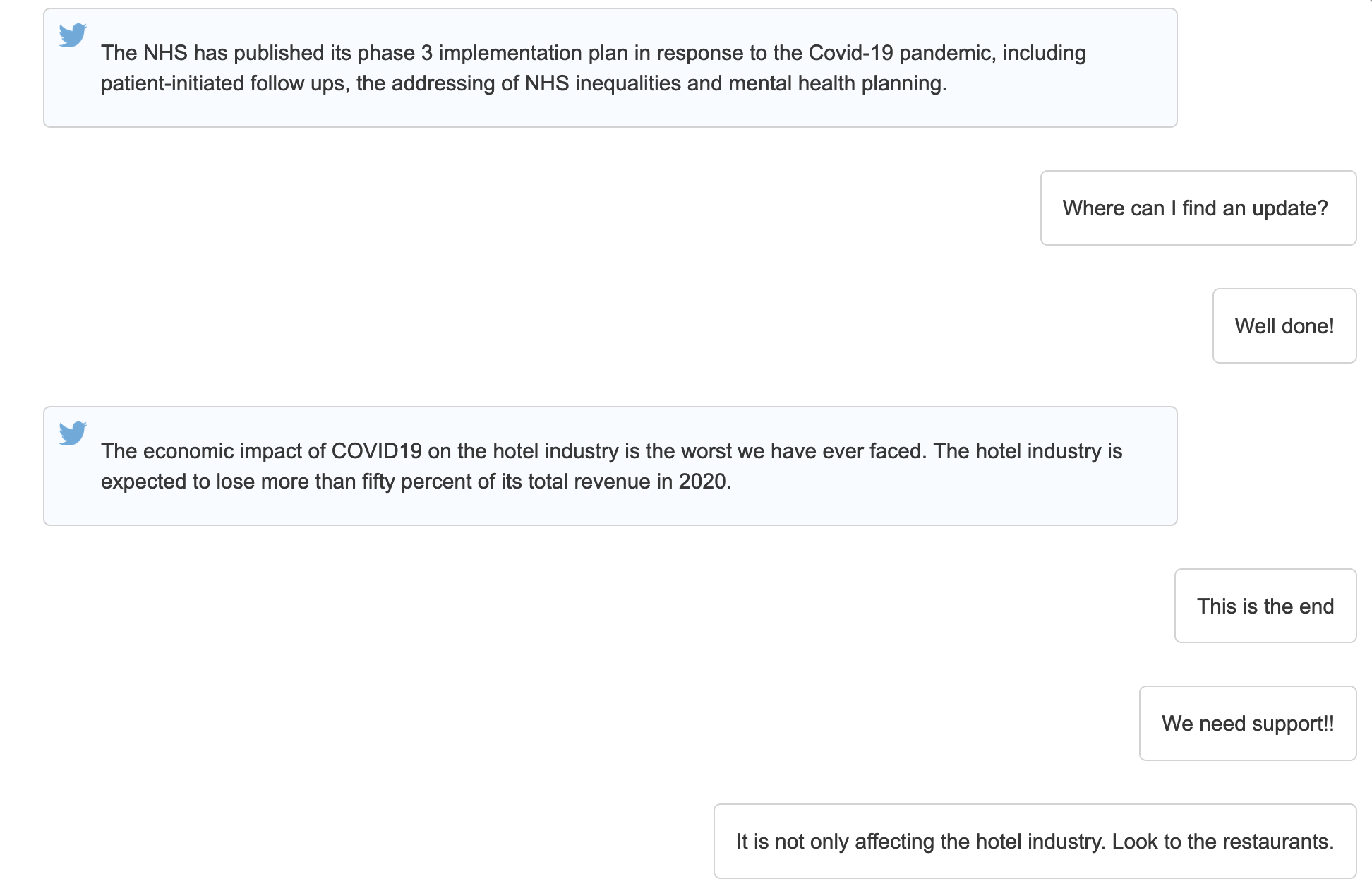 In this example, tweet blocks are aligned to the left and comments for those tweets to the right

left or right add-ons will make the block float. Be aware that this state can conflict with other floating elements such as the multi-column add-ons or human/bot blocks.

tagtog blocks supports a grid of 12 columns. Use these add-ons to create a multi-column layout. You can create horizontal groups of columns forming rows. Currently, the add-ons for grid columns are:

In this example, the two-column layout (col-6) is used for a translation task. The text to translate is on the left column, the text translated is on the right column. The annotator annotates the translation of the annotated text. In addition, the translation in the second row was marked with the attention add-on to warn the user of a potential issue with this translation.

In this example, the 2-column layout (col-6) is used for a QA task. Questions on the left column, and answers on the right column.

You can create multiple rows of columns to create an experience closer to tables. Each row starts at the same height. See the example.

Using this add-on you can align the text within your blocks to left/center/right.

In this example, the 2-column layout is used for a QA task. Questions on the left column, and answers on the right column. On the answer columns, the text is aligned to the right.

Using these add-ons you can set/overwrite the background color of a block. Currently, there is a set of predefined colors.

Using these add-ons you can set/overwrite the color of the text in a block. The default color is black. Currently, there is a set of predefined colors.

In this example, a textbox uses the add-ons colblack and txtwhite to customize the colors of the block. In this example, the annotator labels specific fragments that identify this news as fake news. It has also been marked with the add-on attention to highlight that this news might be fake.

Use these add-ons to customize the font of your block.

Set/overwrite the font family of a block. Currently, there is one predefined font.

Courier (typewriter/machine): txtmachine. Example: This is a piece of meta information.

You can create multiple rows of columns to create an experience closer to tables. Each row starts at the same height. See the example.

You can combine tagtog blocks and also combine it with other markdown content. 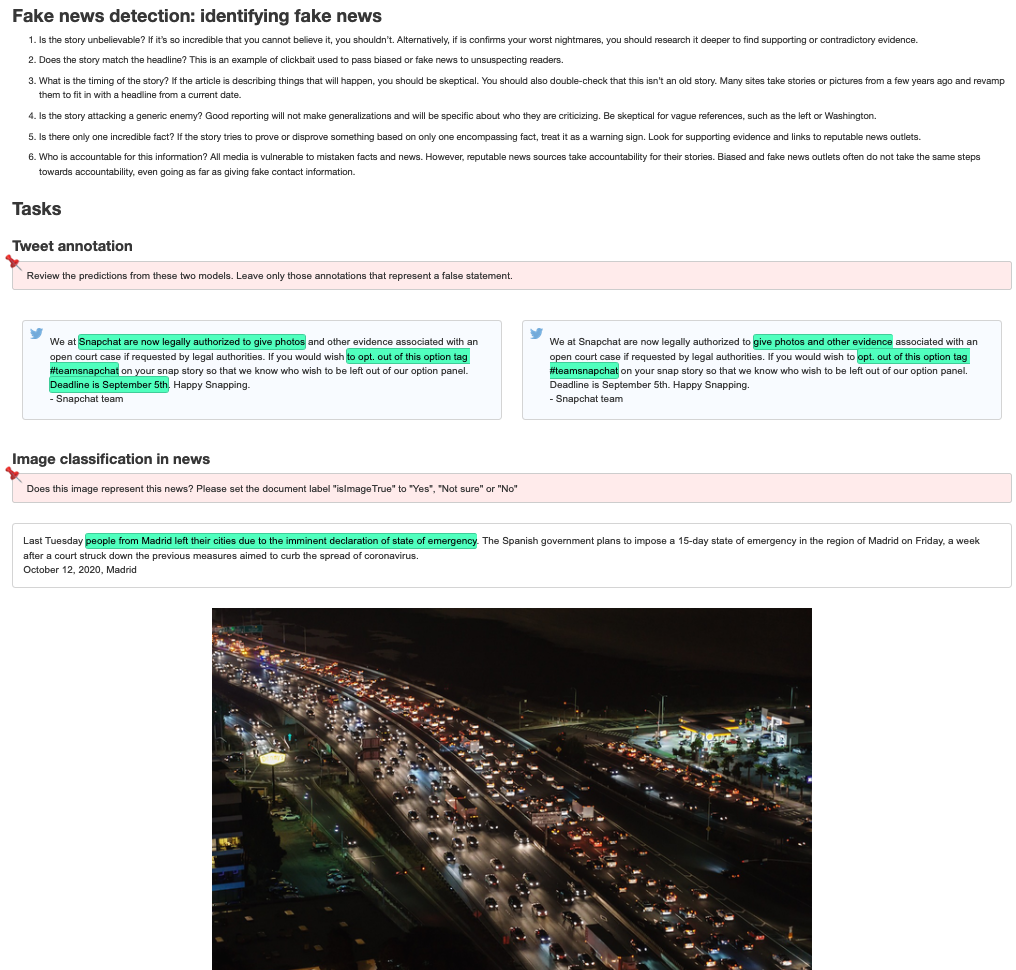 This example shows how to combine components from the Markdown specification and tagtog blocks. In this case, we implemented a flow to review model predictions for fake news in a human-in-the-loop process.

tagtog blocks cannot be nested within each other. For example, you cannot create a task block inside a textbox block.

While you can combine any tagtog block or add-ons together (e.g. task + question left warning + textbox right), be aware that some of these have a predefined style that might conflict visually with other blocks.

Do you have any other suggestions, feedback or requests? Write us at support@tagtog.com